Recreate objects and environments in three-dimensional models with your mobile’s camera.

There are tools that a few years ago were unthinkable for mobiles, and that were only reserved for computers or more specific technological devices. Thanks to advances and the arrival of elements such as augmented reality, the mobile camera can be squeezed much more. It also helps to have apps like the 3D scanner on the iPhone to get more out of it.

A 3D scan involves a process in which you analyze an object or scene with the mobile camera. Thus, you will collect data on its appearance and you will be able to recreate a figure in the form of a miniature on the screen of your iPhone. In the App Store there are numerous alternatives to install an app of this type, which we are going to show you in the following list:

The best 3D scanner apps for your iPhone

So let’s go with the best options to have a 3D scanner tool on your mobile, with its respective analysis and download link.

Maybe lacks a more intuitive interface to learn to handle it quickly. However, it is one of the most complete apps for scanning objects and places in 3D, with a multitude of options that bring you closer to an almost professional experience. It also uses the LiDAR sensor that mounts from iPhone 12s to create more accurate three-dimensional models. 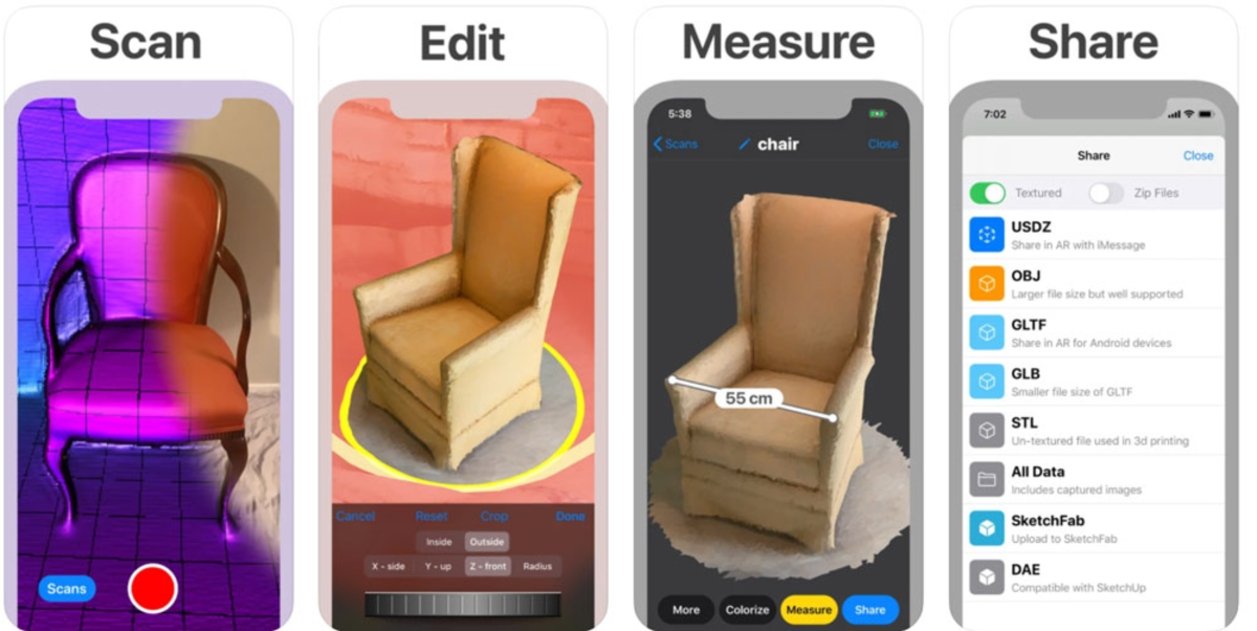 Here, minimalism in the interface plays a leading role, with a simpler learning process. With a simple button you can capture the object or the environment in a very fast way, with a ARKit mode which, like the previous app, is capable of make quick 3D models in objects or scenes of a reduced size.

The app has several formats to export the captures, such as OBJ. In addition, they can be exported to other formats such as STL or PLY through the MeshLab program. All the files that you produce with this app can also be used for 3D printing. The problem is that it is a paid app, although it is not a very high amount. 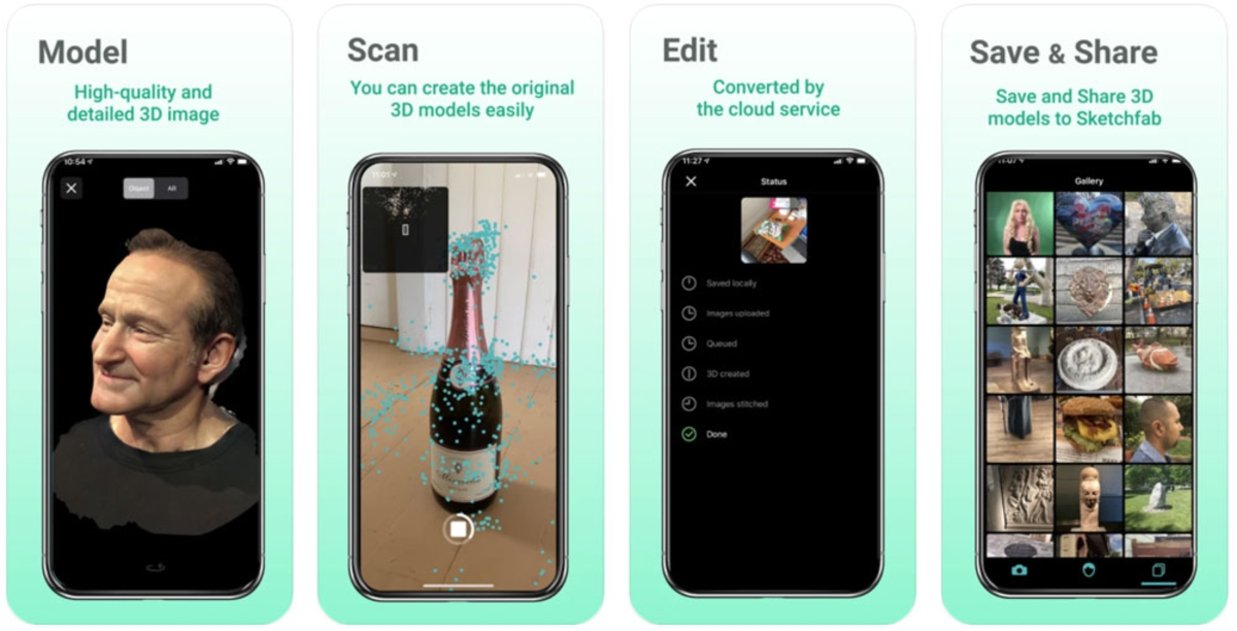 It is an app that is characterized by its simplicity and the speed in obtaining the captures, although it also has its own functions such as a 3D modeling preview, to check if it works for you or not. It is compatible with the iPhone X, XS, XS Max, XR, 11, 11 Pro, 12 Pro, and iPhone 13 onwards.

All rendering is done from the app and locally, so there is no need to register or store it in a cloud. Another remarkable feature is that you can edit scan with tools that has the app itself, so you don’t have to resort to other applications. 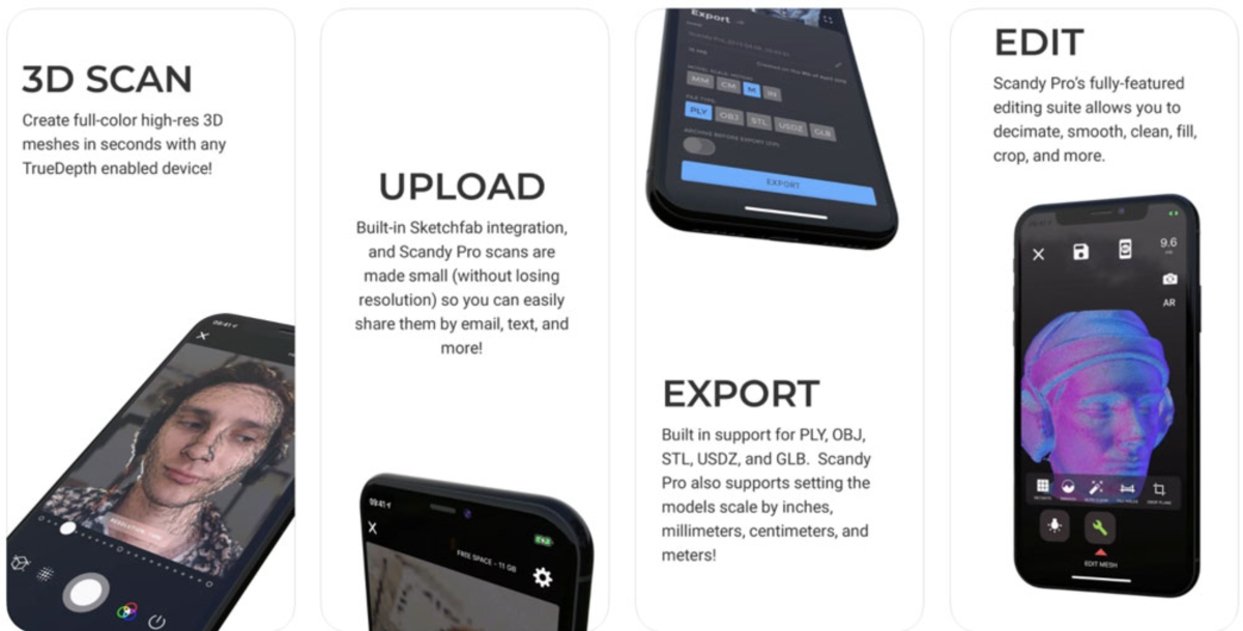 This app comes to be as an all in one, since it serves both to scan in 3D and to enjoy everything that the augmented reality. It also does all the processing for three-dimensional models, because you can scan, edit, convert and export the files of the registered objects or scenes.

Within that edition, you can modify images, add text, resize or even merge two different scans. This app also gives the possibility of exporting the files in OBJ or STL format for use in a 3D printer.

This is another of the apps that make the most of the iPhone’s LiDAR sensor, to such an extent that it is included in the name of this application. Count with one colorization engine that allows you to generate the highest quality color 3D scans in the shortest possible time. On the other hand, it does not have a limit of scans or registrations, although it is free.

It allows you to export the files both locally and export them in the cloud, with a multitude of compatible formats. Best of all, the entire scanning and editing process can be done without an internet connection, so you can capture anywhere. 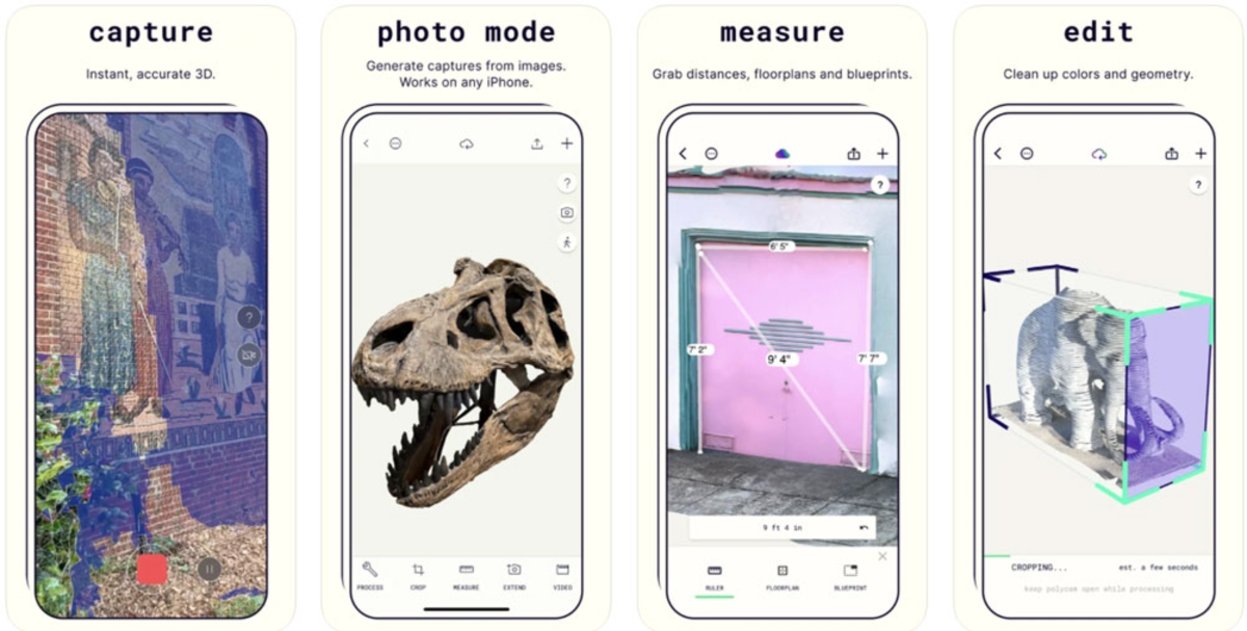 The recommended thing when you scan an object or environment is that the mobile should be as stable and still as possible. However, the app itself has its own precision tools to recreate the 3D model as accurately as possible. You also have the possibility to infinitely scan, being even free.

Despite the multitude of tools it has, it lacks an editor to modify the capture afterwards. That causes you to have to use an additional app to edit the parameters that you consider for an improved final result. 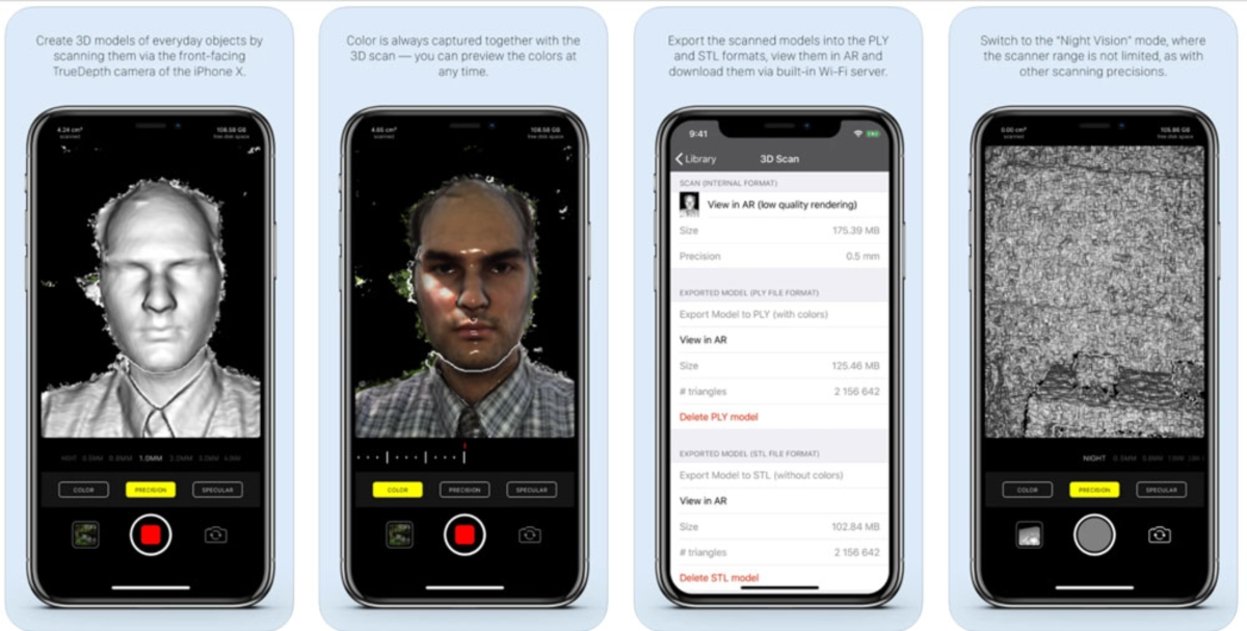 It is a highly rated app in the App Store, which has many functions, although it works better with terminals with TrueDepth technology. Something interesting you can do here is share the scans for other apps in both 2D and 3D, either to a messaging platform or to a social network.

This app has a space designed for the most experts in the development of three-dimensional models. Count with one developer SDK with which you can add your own code and expand the capabilities of this tool to unsuspected limits. 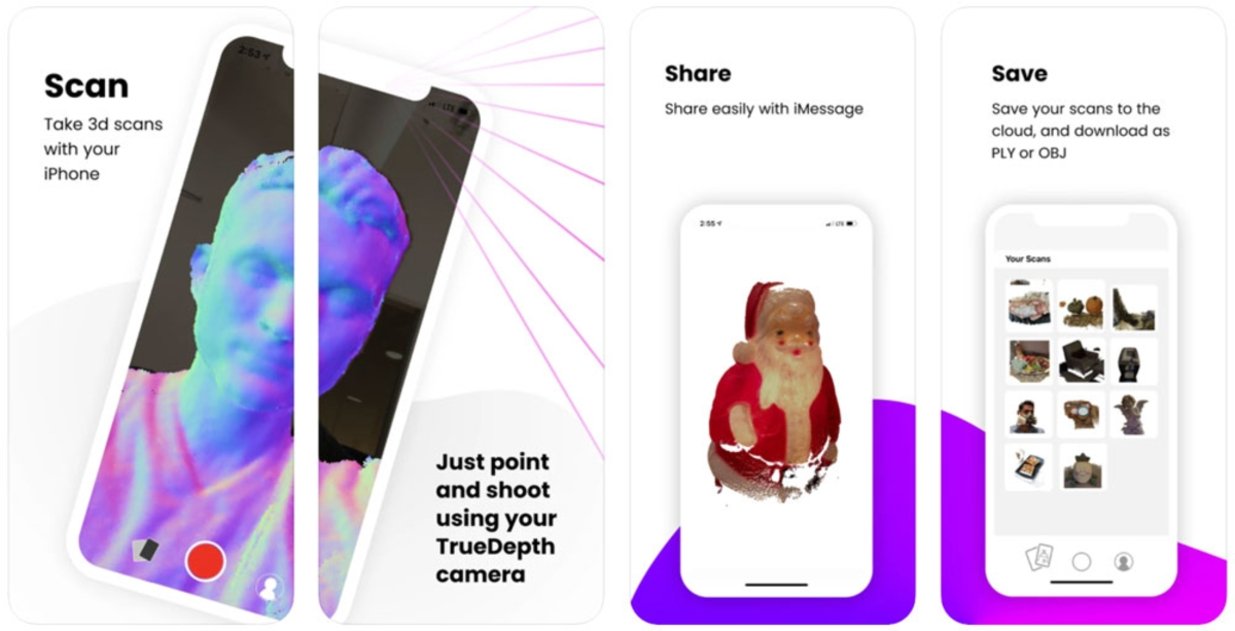 If you are not interested in open spaces or large settings such as a room, this is the best alternative for you. It is an app that is aimed only at 3D models of sneakers, for all those passionate about fashion. It is also designed to scan the physical products and create photorealistic models that can be used to upload them to the online store.

In fact, it has additional functions for export to an e-commerce website. Downloading the app is completely free, as well as the first 3D model, although to do more you will have to pay one € 10 monthly fee. Keep in mind that this tool is for a more professional field. 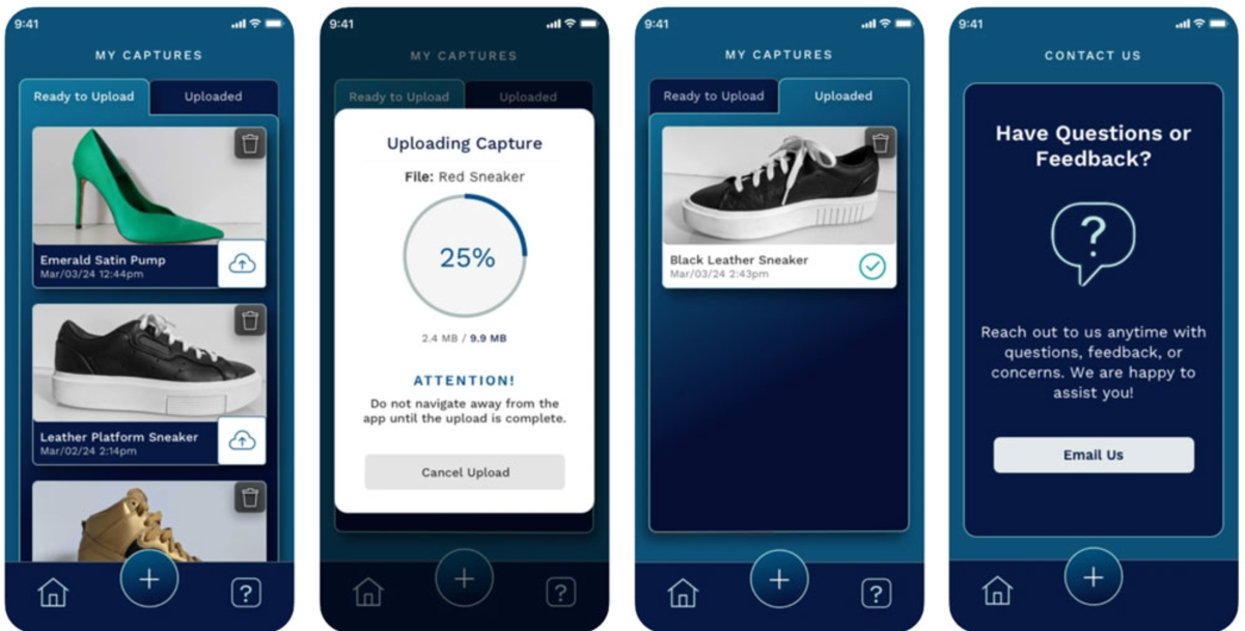 These are the best options you have at your disposal in iOS to scan objects and scenes in 3D, in a simple way and without the need for special equipment.